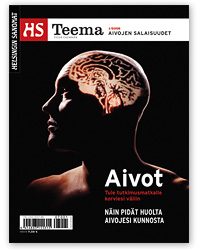 HS Teema is a new and different kind of magazine that deals with one subject at a time in depth. The new magazine series produced by Helsingin Sanomat daily newspaper covers its subjects in detail and according to the principles of reliable, factual journalism. The series aims to describe contemporary phenomena or topics that are just starting to attract attention.

"We want to offer our readers the means with which they can understand the world around them better and in more depth. Instead of just scratching the surface, our intention is to give more information about one subject at a time, from many different points of view," says Juha Sainio, HS Teema's producer.

The subjects addressed by HS Teema can be domestic, international, social, scientific, artistic or any combination of the above. The theme of the first issue of HS Teema is the secrets of the brain – what, in the light of current research, do we understand about the functioning of the brain and its effect on our behaviour.

The issue covers topics such as how our memory works, how our nerve cells learn, how our emotions affect our decisions, and how our childhood affects the development of our brains.

HS Teema appears four times a year. It is produced by the editorial team of Helsingin Sanomat and regular contributors to the newspaper. In 2008, the themes will include the Baltic Sea (15 May), personal relationships in the era of the internet (18 September), and the 1960s (13 November).

Helsingin Sanomat is part of Sanoma, the newspaper Division of the SanomaWSOY Group.