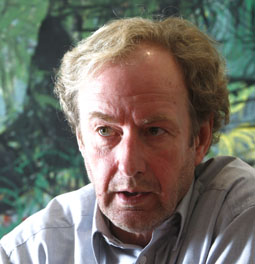 Tall, blonde Dutchman Ben Tiesnitsch, 55, is one of the three new directors appointed to SanomaWSOY Corporate Centre in April. Tiesnitsch will be the Chief Human Resources Officer (CHRO) of SanomaWSOY as of 1 June 2008.

Tiesnitsch is eager to get his hands on to his new responsibilities. "There is a lot to do and to learn", he says. Tiesnitsch is already very familiar with the Sanoma Magazines Division in which he has been working the past seven years. In addition, he is already involved in the Group Human Resources Development activities.

"This in an ideal timing to start in my new position. There is many new things going on at the moment and the future plans are now determined", Tiesnitsch says. In Tiesnitsch's plans the agenda for the Group HR will be strongly aligned to the Group strategy discussion. "My plan is to meet lots of people in different positions."

The two most important issues on the new CHRO's agenda are organisation and talent development. "We also need to put lots of effort into recruitment in order to attract right kind of people to the Group now and in the future. Besides our professional content makers, we need also other professionals. In addition, we have to create good development programmes in order to develop our talented people further – not only managers, but also our specialists."

Dream job in an ideal field of industry

"I was born in the countryside of the Netherlands and as a schoolboy I helped at the nearby farm. I was planning to become a farmer myself but it turned out different. After my studies I ended up in HR by coincidence in the late 70's. It's still a fascinating field to work in", Tiesnitsch says.

"In HR you are part of almost everything. I really enjoyed that and stayed in this discipline with responsibilities varying from training to organisational restructuring and general HR issues." Later on Tiesnitsch started in the Dutch media company VNU and this is the path he is still on. "In the media business everything is moving and changing all the time, this is an industry full of challenges."

Tiesnitsch admits to be addicted to media, especially news and newspapers: "I read five or more newspapers a day already as a student. And I still do, although these days this naturally also includes the online news."

Besides his new responsibilities and coming challenges at work, Ben Tiesnitsch is really waiting to see more of Finland beyond the Ludviginkatu office and Helsinki–Vantaa airport. "Finland is a big and diverse country, especially for someone from the Netherlands, with few inhabitants and lots and lots of water."

Tiesnitsch's home has been in Amsterdam now for more than 35 years. "In my free time I relax by reading books and sailing – actually I'm an outdoor person and I really enjoy the eight months sailing season we have in the Netherlands."