A Better World - with the Help of Margriet!

A Better World – with the Help of Margriet! 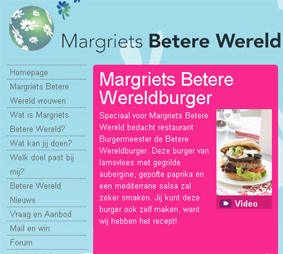 One of the flagships of Sanoma Uitgevers, Margriet, is celebrating its 70th anniversary in 2008. With a circulation of some 320,000 copies each week Margriet is one of the Netherlands' biggest women's weeklies.

One of the key things for Margriet's lasting success has been its close relationship with its readers. When the editorial office was thinking of ways to celebrate the coming anniversary they decided to make a special website supported by a print issue. The issue would strongly stand with its readers and the things important for them. At the same time they created an extra welcoming dimension on the magazine's online site. De Betere Wereld or the Better World was created.

To celebrate the coming birthday, the makers of Margriet decided to present 70 Dutch women and the charities they are dealing with to their readers. De Betere Wereld special issue was published in October 2007 and it included stories of 59 women. 11 more women and their charities were presented in the last 11 issues of 2007. The people for the special issue were chosen by the editors, and the last 11 women presented in the stories were suggested by the readers.

The women were asked not simply to add the donation to their funds but to try to multiply the amount. One woman for example decided to use Margriet's donation for organising a benefit concert, which brought about such publicity that it in its turn resulted in even more money than donated to the charity in total.

Margriet's online visitors are urged to support the charities by becoming friends with the women of the Better World. The readers can follow the success of these charities throughout 2008 online.

What is the better world like for Margriet readers?

The charities range from local to international, with the only common nominator being that they all have been founded by Dutch women interested in society around them.

For example, Meiden voor Meiden ("Girls for Girls") is a project in Amsterdam which invites volunteers to befriend teenage mothers who often are lonely and live isolated lives. The volunteers take these girls out, cheer them up and generally try to make their lives a little better.

Ein Bustan is a project which initiated the first Jewish/Arab primary school in Israel. The project hopes for more understanding between the two communities. Young in Prison is a charity which tries to make life a little more comfortable for young offenders in prisons in countries like South Africa. Hospice At Home is a project which wants to offer terminally ill people a place where to spend the last weeks of their lives.

Margriet is more than just a magazine. Margriet publishes books, has its own website, organises Margriet Symposiums in the area of health, develops its own line of luxury products and annually hosts the Margriet Winterfair, an event where 79,000 visitors page through Margriet 'live'.

Margriet is published by Sanoma Uitgevers, which is part of the magazine division of the SanomaWSOY Group.