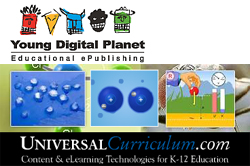 Young Digital Planet (formerly Young Digital Poland) was founded in 1990 to operate in the interactive software market, educational content production as its main activity. The company has grown rapidly ever since its initial steps under just four founding fathers. At the present, YDP employs nearly 300 people the majority of whom works in the R&D department.

YDP became part of the SanomaWSOY Group in 1999 when the Group's educational publishing and general publishing division WSOY acquired a 29% share of the company. The share rose to 51% in 2004. YDP is nowadays a part of WSOY Educational Publishing business that includes also operations in the Netherlands, Belgium, and Finland as well as in Hungary that was acquired in March 2006.

While being a Polish company, YDP has global ambitions. The ICT industry continues to bloom and it is not limited by any physical location. It is possible to one company to serve an international audience. That is also why the former name, Young Digital Poland, was changed into Young Digital Planet in March 2006.

The current portfolio of YDP includes software development such as e-content to accompany books, educational software such as intranets with subject information for primary and secondary schools, language learning software, and eLearning technologies like online school. YDP works in cooperation with large publishing companies and governments in many of its products.

YDP has a strong competitive position against its rivals. The company's relatively long experience in the adolescent digital market, flexibility, and innovation appeal to customers, whereas well-designed, cost-efficient core processes enhance YDP's ability to provide high quality products that are affordable.

Authoring tools allow people to specialise in the content rather than in IT. The tools enable the content producer to work directly on digital platform without being technical specialist. The tools are taken care by nine programmers.

– We have very specialised and experienced people working in teams. One may know little outside his/her own particular area, but flawless cooperation makes the company strong, Dereda asserts.