Nelonen's internet site introduces new programmes and offers more information on ongoing series. Programme related products can be ordered via the online 4shop. The latest innovation is Hauskat nettivideot (Funny internet videos) programme that only can be followed on the web.

- We are continuously analysing our programme offering in order to create supporting content for our internet site. Our aim is to create multi-channel content especially for our most important new programmes and series, says Juha Hätönen from Nelonen's new media unit.

How desperate you are?

Most of the content on the internet either introduces new programmes or provides more information on broadcasted series.

- Before desperate housewives started in Finland , we had a test "How desperate you are" on our site. 250,000 unique visitors made the test on the web before the series was even bagn, Hätönen describes. The first show attracted over 500,000 viewers; half of whom probably visited Nelonen's site beforehand. 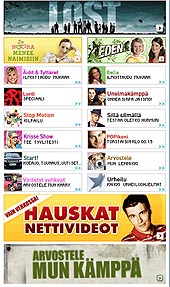 The second production of Finnish version of reality series the Block was seen in Finland during spring 2006. In addition to 11 episodes shown in Nelonen, the programme had its own section on Nelonen's web site. - As the series went on, we had material on events between episodes on our website. We had shot a lot of more material that we were able to show in 11 episodes. We were able to utilise this material on website, Hätönen says. Related to The Block, Nelonen also produced a home and decorating magazine with Sanoma Magazine Finland.

- Our aim is to create web material so that we will increase the time people spend with our programmes. We also offer extra material and hope is that people feel that they are part of programme's community. For example "Judge my house" web page related to the Block had enormous success, and people have started to judge each other houses and suggest ideas for decoration.

According to Hätönen, Nelonen is investing on web content because of the time people spent on the web is increasing. - For example, watching TV and surfing on the web can be done simultaneously. TV and internet support each other very well and by using both channels, we are able to supplement our offerings, Hätönen concludes.