Shopping centres in Helsinki metropolitan area are growing in number as well as in size. At the same time, new shopping areas emerge also in other parts of Finland. Rautakirja's kiosk chain, R-Kiosk, wants to be where people are and the kiosk chain's logo can now be seen in shopping malls, city centres, as well as in traffic junctions: a versatile concept succeeds in different market places.

Sello shopping centre in Helsinki metropolitan area grew enormously in September. A month later the other shopping centre, Jumbo, did the same in the other end of the metropolitan area. Sello got two new R-Kiosks at once and the new part in Jumbo brought the third kiosk to the mall. According to Manager, Development in kiosk operations, Harri Koivula this is not at all too much. - The new housing area near Jumbo would need its own kiosk. We also have two kiosks in the area just outside the Sello to serve our customers. 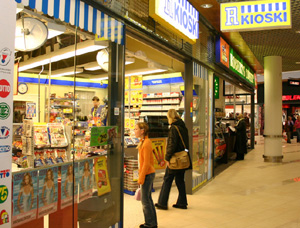 Having kiosks almost next to each other inside shopping centres is profitable business due to significant customer flow and the flexibility of points-of-sale. R-Kiosk has also developed a special concept for small kiosks in shopping malls - and it looks like it is going to be a success!

- Rents are high in new centres, especially in the best market places that we are interested in. The kiosk area has to be planned carefully to be efficient, Koivula describes. Games, soft drinks, sweets, and magazines are the most important product categories in shopping centre kiosks. - These centres always include a hypermarket, so it is not profitable to sell food just next to one of those, Koivula says. - The products bought from the kiosks are consumed immediately; they give customer more energy to enjoy shopping.

The product range in kiosks varies. - For example, we do not sell coffee in the new kiosk in Jumbo since there is a café juts next to it. On the other hand, in the new furniture and decorating centre, Lanterna, coffee is one of the most important products because the centre does not have any cafés, Koivula sums up.

Some kiosks in shopping centres do not follow the shopping centre concept, but are full-sized convenience stores serving especially travellers. The biggest product category is the commuter tickets.

R-Kiosk is eager to participate also in new traffic junctions in Finland - the whole kiosk concept was established to serve travellers 95 years ago. The travellers' kiosks sell especially breakfast products and other small snacks.

Downtown kiosks in city centres as well as the ones in suburban areas fall between the small shopping centre kiosks and full-sized convenience stores. - This is the most traditional form of our kiosks. They serve the neighbourhood offices as well as residents. These kiosks have a very important role in our chain, Koivula says.

Planning a good concept for kiosks in different market places requires creativity from R-Kiosk team. The kiosk concept is continuously developed in different pilot projects and the best solutions are then included in basic concept. - Even though the kiosk concept varies, our aim is that the differences are not visible to the customers. For them, R-Kiosk is the same, well known, and trustworthy place to shop, Koivula emphasises.