The success of Finnish literature is in the hands of readers

In Finland, the autumn is the main season for books and their writers. The season's peek is Christmas. The success of Finnish literature is in the hands of readers, according to WSOY's Publisher, Harri Haanpää, it is almost impossible to predict the success of a book beforehand.

The Finlandia Prize for Finnish literature, distributed in each autumn, has a positive effect on sales of awarded book, but does not guarantee a permanent success. However, there are exceptions.

- It seems that Kari Hotakainen, who won the prize in 2002, has established his position as popular Finnish writer. Still, I want to emphasize that neither he nor WSOY has counted on his earlier success in his latest novel, Iisakin kirkko (Churh of Isak) published this autumn, Harri Haanpää says.

- In the field of culture, the general rule is: "What goes up, must come down". If someone is very popular, it is likely to change in the long run. Usually there is someone else always waiting for a moment of changing tides.

The gems distinguish themselves in the book flood 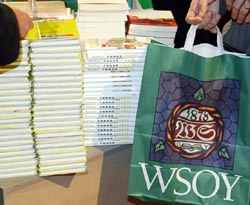 Finland. Each book that sells more than 20,000 copies can be called a success in Finland, says Haanpää. When the publishing agreement of Juoksuhaudantie by Kari Hotakainen was made, WSOY agreed to print 5,000 copies of the novel. So far the book has sold some 115,000 copies.

When the publishers have to make a decision to accept or reject a new writer, the decision must be made with feeling and experience. Annually, WSOY receives some 1,500 manuscripts. - Scripts that could make it as books separate themselves very easily, Haanpää says. A hundred Finnish novels include several real gems, that the average readers might not even discover, Haanpää concludes.

- Looking at WSOY's selection of Finnish literature in 2004, I would say that there are at least ten excellent books. Of course the readers decide what is excellent, but e.g. authors Asko Sahlberg, Jari Tervo, and Juha Seppälä will publish this year their most remarkable works. And Iisakin kirkko by Hotakainen is also one of those.

In Finland, domestic literature is more popular nowadays than foreign translations. - Until a few years ago, foreign literature was more successful, but the situation has changed, Haanpää says. Even he cannot explain exactly why this change has occurred. - I would say that it is partly due to the fact that foreign translations are sold less through book clubs than before, Haanpää ponders.

- On the other hand, Finnish culture as a whole is now becoming more popular. This can be seen in music, films as well as in the popularity of domestic literature.

Finnish authors succeeding in outside Finland are few, the best known are Mika Waltari and Arto Paasilinna. However, according to Haanpää, there is an increasing interest in Finnish literature in Europe, especially in Germany. Also Swedes seem to once again be interested in reading what the Finns have to say.