Donald Duck, the popular cartoon character who is kind and energetic but often unsuccessful in his attempts, celebrates his 70th anniversary on 9 June. Sanoma Magazines publishes Donald Duck's own magazine in Finland and the Netherlands.

According to Editor-in-Chief in Finland Jukka Heiskanen, Donald Duck was mainly working during the big anniversary. - The celebration started as early as January and many different stories about Donald Duck have been published in the magazine during the year so far. In week 24, which is the birthday week, we published two special issues to be distributed together with the basic magazine: a 52-page anniversary issue and a special 'B' number that includes a long Donald story by Carl Barks, Heiskanen says.

In the Netherlands Donald's birthday was also celebrated during week 24. - In our issue number 24 we had a new comic story about this anniversary. There is a special cover, a themed poster, and a reprint of the Wise Little Hen story from where Donald's story started in 1934, lists Thom Roep, Editor-in-Chief in the Netherlands. - We also created a radio commercial, which was broadcasted for a whole week on a popular Dutch radio station.

A favourite for the whole family

Short-tempered but kind-hearted Donald Duck has always been really popular, especially in Finland. - Donald Duck is the dearest cartoon character for Finns, and this can be seen in the Donald Duck magazine's circulation figures. When the first issue of Donald Duck magazine was published in 1951 the edition was 34,000 copies - nowadays the circulation is over 295,000 and the magazine has more than 1.4 million readers, Heiskanen says proudly.

Donald Duck is very popular in the Netherlands as well. Donald's own magazine has been on the market for more than 50 years. - Like in Finland, most readers are subscribers. The circulation of the magazine is 336,000 copies a week. That's more than almost anywhere, but because we have almost 17 million people living here, you cannot really compare that to Donald Duck's popularity in Finland. Finland is the absolute winner worldwide!

According to Roep, the secret of Donald's success is the fact that it is not only a magazine for youngsters, but also a magazine for families. - People who read Donald Duck when they were young now have their own children. They order Donald Duck for their children and hope that that they also enjoy the magazine. And for the proud mother and father there is an immediate excuse to start reading the comic once again, Roep laughs. 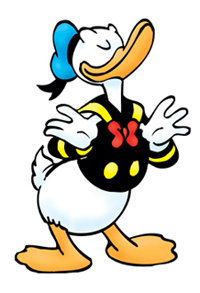 Donald Duck is absolutely the most popular of Disney's cartoon characters in Finland as well as in the Netherlands. - Donald is also number one in the other Nordic countries but in the United States and Italy, for example, Mickey Mouse beats Donald Duck, Heiskanen says.

Why is Donald Duck so popular? - I would guess that the secret of Donald's popularity lies in his complex and awkward character. Donald Duck is believable and really human, but also has many weaknesses. Donald gets easily excited but his short temper, impulsiveness and endless self-confidence makes his projects often fail. Along with cheeky and clever Mickey Mouse, Donald Duck also reminds us of our own weaknesses and helps us to laugh at them light-heartedly. I think that at least we Finns tend to stand up for the weaker ones, Heiskanen says.

To Heiskanen Donald Duck is also a personal passion. - For me Donald has been a dear and familiar character since my childhood. Like many Finnish children, I learned how to read from Donald Duck. In particular, Carl Bark's stories have been the most unforgettable ones. Cartoons are my passion, and I already knew quite early that I would work with them in my adulthood in one way or another. I cannot imagine a nicer employer than Donald Duck.

Despite his 70 years, Donald Duck is still very youthful but at the same time old enough to get his own exhibition in a museum. - In the Netherlands there is a very nice and interesting exhibition in the Cobra Museum near Amsterdam showing a lot of Donald Duck material and paintings by Carl Barks, Gottfried Hellnwein, Harry Balm and Kaj Stenvall, Roep says.

In Finland a special Donald Duck exhibition, where one can find Donald's home and his famous car, for example, was opened in Päivälehti museum in Helsinki in March. - More than 20,000 people have already visited the exhibition and the museum has beaten all previous records, Heiskanen says.