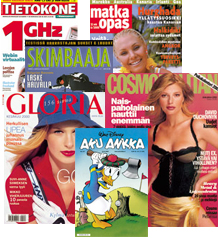 A national media study published today reports that Helsinki Media has further strengthened its position as Finland's number-one magazine publisher; and that its titles are read by nearly 300,000 more readers than last year. This brings the total of readers to just under 6.8 million.

This growth in readership was reflected across a large proportion of Helsinki Media's magazines. Particularly impressive growth has been recorded at the women's magazine, Gloria; the house and home title, Glorian koti; Cosmopolitan; the health magazine, Hyvä Terveys; and the travel magazine, Matkaopas.